Bushra, Asha, Some other people ... and Jaz! 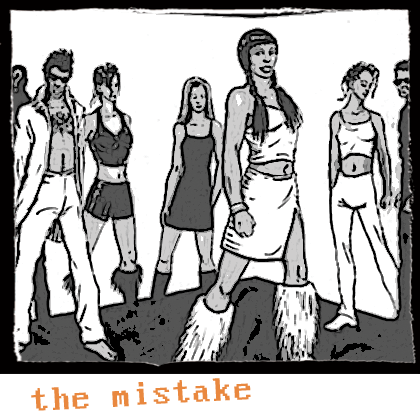 Just as it seems D-roid’s career is but a dream in the mind of it’s creator, enter BB, Pa to the out of date pop producer Has been.

Yes at last a real pop star with that X Factor quality that will make D-roid’s first single “Mindless” a hit for a few seconds. Sadly she does not share in D-roids lack of linguistic skills and therefore attempts to talk occasionally, which is one of the reasons leading to her untimely demise.  That and the fact that she’s extremely annoying and keeps attempting to upstage D-roid by waving near naked parts of her anatomy about. Oh yes and the inconvenient truth that she didn’t actually sing on the manufactured group’s One and only success.

In the backdrop of the story narrative cul-de-sac that is Mistake, D-roids short lived replacement Asha co-writes and performs her solo single “I need You” before finding an existence in fames afterlife of programmes shown on ITV20 and I’m a Nonentity get me out of here.

Last known video of Bushra before she vanished …